Edit
watch 01:36
We're Getting Mutants in the MCU - The Loop
Do you like this video?
Play Sound

"30 years without a girlfriend? Aahn, I feel shivery after the feast."

Asmodeus is the Demon Lord of Lust and is known for twisting her victims down the path of pleasure.

She has long pink hair that reaches down to her legs with two giant horns curling backward and up on both sides of her head. She has a pair of small, retractable black wings sprouting from the center of her shoulders, and a knee-length black tail with a heart/spade-shaped tip. She wears an ornate purple-and-black-striped collared shirt with a high bottom that exposes the undersides of her breasts, and an ornate, elaborate cape that reaches down to her butt, sporting eight points with beads in each area, and has fur at the collar. She also has matching-pattern fingerless gloves and a side-split micro skirt, on top of which is a black belt having a large, ornately engraved buckle. For her feet, she wears black boots with a spike on the toe boxes – in some depictions, there is a pair of silver, skull-shaped studs resembling buttons on the front side of the boots – and there are black leg bands on her upper thighs. Every aspect of the way Asmodeus dresses is meant to exude sexiness and entice whoever looks at her, be they male or female.

Asmodeus is the most difficult Demon Lord with which to deal. While it is easy to tell at a glance that she is the one with the most common sense among the seven, her attitude of being sexy regardless is the real problem. Besides being troublesome, Asmodeus likes to tease for the sake of it. As she has the ability to raise the feelings of lust to the maximum in the targets she likes – be it gradually or quickly – and then making a hobby of suddenly leaving most of them unattended in order to observe as a voyeur, it’s highly advised to take the measures necessary to not easily give in to her allure.

Asmodeus is an extremely adept, able fighter, and in combat, it is very difficult to deal with her. She uses magic power to manipulate the winds and the environment with natural hazards, thus making her one of the stronger Demon Lords, nearly on par with Lucifer. She is also capable of producing more bodily pheromones than usual, as well as summoning a lewd, flowery tentacle monster that secretes acid; at the least, this would destroy the clothing on her victim and restrain them for her to defile them at her leisure, but at worst the monster would devour or even melt an enemy to death. 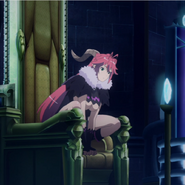 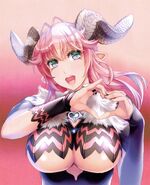