"S-Since there's nobody here, guess I could sing... Anyway, I am, among Demon Lords, the WEAKEST! But you, go and lose your head by my REQUEST!"

Astaroth is the Demon Lord of Melancholy, and a very popular musician in Earth's virtual world. She is quite the braggart under this pretense.

Astaroth has two horns curving downwards on the back and sides of her heads behind her ears. She has pink hair done in shoulder-length twin-tails with two tiny red hats on each side of her head. Astaroth wears an elaborate black-and-red gothic lolita-styled outfit, consisting of ruffles on her shoulder, throat, and right hip; a ribbon on her chest; pink lace on her chest and waist; a double layered skirt; and a ruffled purple handkerchief on her right hip. She wears fingerless gloves with elaborate pieces of metal on her arms (with the right piece being very large and the left piece being very small) and she wears red-and-white striped thigh-high stockings on her legs with black ballet shoes on her feet. She has an axe guitar whose black head and red body are of the same material and appearance as the metal pieces on her gloves.

Though Astaroth might say Belphegor stole the seat of "demon of laziness" from her, in actuality she is a fellow NEET, and probably the only person she could call her friend.

She's quite pessimistic with an almost cynical nature, and she herself thinks as weak, a Demon Lord with too few believers who stubbornly day-dreams. Behind her idol-hood and performing pretense, she is very sociophobic and tends to easily lose her nerve, especially when it comes to speaking in front of everybody. However, once she holds her guitar, it seems she becomes able to use her gloomy music to communicate her emotions.

It is known that Astaroth is a phenomenal musician and singer. Her habit of rapping during conversations with others shows she has quite the poetic mind. To an extent, Astaroth manipulates peoples emotions via her music, which is rewarded in the form of fame and increasing views of her videos. 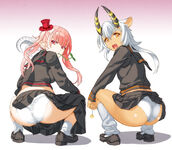 Astaroth during her duel with Lucifer.
Español
Community content is available under CC-BY-SA unless otherwise noted.
Advertisement