Belphegor is the Demon Lord of Sloth, known for being lazy or unwilling.

Belphegor has a semi-animalistic appearance, with goat ears, light-tan skin, short white hair with a butt-length rat-tail, two green-and-yellow horns going straight up on her forehead, and a huge black-and-yellow striped tail ending in a three-fingered purple claw at the end. Her claw is prehensile and can be used as well as her hands. True to her name, she casually wears a big white long-sleeved shirt buttoned only at the navel, white thong panties, white slouch-socks, and a pair of white earrings. Belphegor has a white rose shaped tattoo between the top of her breasts. Belphegor also has a black or grey bow-ribbon tied around her neck along with a little bell. She has three black straps around the uppermost portion of her thighs and a single black strap around the uppermost portion of her arms. She always carries with her a stone jug of sake on a blue string.

Belphegor spends the day and night almost without moving one inch, and almost all the business she takes care of is within the range of her tail. She especially likes drinking sake, reading manga, watching anime, playing video games (both console and online), browsing the internet, and generally spending time with her electronic devices (PC, tablet, consoles). It is only when enjoying these that she spares no efforts, or rather exerts all efforts.

Despite her sin, Belphegor is surprisingly a good listener. She responds to Belial's orders, while still paying attention to her hobbies. She still acknowledges Lucifer's assault on the Demon Lords, but simply refuses to do anything about it without a very good reason.

Belphegor is said to have the highest abilities among the seven Demon Lords, as reflected by having the most demonic appearance; however, due to her ultimate laziness, she won’t show them. As such, her favorite phrase “If I get serious, you’ll be amazed” is controversial among demon researchers who cannot decide whether or not it’s true.

Later, it is revealed that Belphegor possesses the ability to create and alter digital realities such as video games. This unique ability hosts other humans or "fans" to play along in an RPG environment, and forget the rest of their lives in doing so; however, it irks her when players complete her games, thus making her have to create more add-ons to further entice her audience. This clever ploy both fuels her and Mammon's collective power. 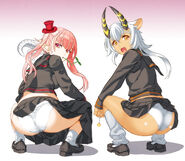 Belphegor relaxing with one of her many electronic devices.

Belphegor and Mammon in their bras.
Español
Community content is available under CC-BY-SA unless otherwise noted.
Advertisement