The Demon King Gravures are tales of how the Demon Kings sometimes spend their free time, mingling in the human world.

Effortlessly lying down on the beach, spread-your-legs-wide towards the sky!

The sounds emitted by the MP3 Player were the “First Radio Stretch”, a hell camp broadcast made every morning.

Lady Levia-tan was the Demon King of Envy, but was riding the lead of the flowing eloquence of the hell camp broadcast announcer that put on light music, in the middle of relaxing her body to improve her health.

Smooth and plump, shiny and jiggly♪ From the worshippers’ gulps, her voluptuous body that would put a gravure idol to shame and make her green with envy lying on the sandy beach, the Demon King was exposed to public attention when she revealed the inner side of her thighs full with meat as if splitting them open, and letting out a hot sigh of “Nh…” every time she stretched.

“Raise the hips with your hands on your knees, looking at the camera~!”

Get on all fours and raise your ass! There!

If you push up your butt so much looking like it’s bursting, that pose of a female leopard will reflect the gleaming sunshine.

“Afuh”… It can’t have been my imagination to have heard that voice.

Leviathan: “Ye-ah, this year I’ve grown in many ways, maybe this is biting into my butt, or here or there, I wonder if this size is too small? What do you think? Behemoth?”

Her familiar, “Behemoth”, was quick to give her a thumps up! A sign of “there doesn't seem to be any trouble.”

Biting deep into her butt… I’d rather be the one biting her instead, without stopping to worry anymore about the swimsuit grinding into this or that, she restarted stretching, letting out moans of “ah…”, “nh…” and “huu…”.

“Lie down on your back and lift your body, with the movement of a suspended ceiling~!”

As directed by the announcer, she stuck out her navel and crotch towards the sky, in the pose of a bridge.

Majestically, the Demon King was too lofty to care about the gazes around her, though there was no reason not to tease the men on the beach.

And its aftermath erupted in unexpected places…

Female beachgoer A: “Hey! What, are you looking at another woman!”

Female beachgoer B: “Whaat, this other girl stretching out under my nose!”

A storm of envy here and there in a couple, between lovers, between husband and wife, it’s a pandemonium of family breakup.

With Levia-tan’s charm, the situation is really cruel. With that said, with such noise in the human world, as far as the person herself goes, it’s outside of the Demon King’s concern…

“Lower your hips deeply as if standing on your tiptoes, and spread both your legs, turning around-!“

Leviathan: “This pose is difficult, how’s it look? Behemoth.”

Leviathan: “Ye-ah, my body’s completely loose too, shall I go swimming soon? I’ll wait for you on the other side, Sister Lucifer, ok-♪?”

A beautiful afternoon, where colorful, refreshing birdsongs run through.

Whenever wind flutters smoothly, her pink hair gives off a sweet smell that you can’t quite place. Her gloomy expression, with her cheeks turned red, looks very seductive. Her chest, that has grown so abundant that seems about to spill over. The beautiful legs of the Demon King extended, supple and slender.

While she enjoys a caffe shakerato at a fashionable, small open terrace today, the eyes of the passersby going back and forth are glued to her.

Asmodeus: “I’m bored. Isn’t there something interesting to do? Riight…?”

As she said this, she winked at the clerk and passersby with their eyes on her. They were instantly affected by the Demon King’s pheromones… they yielded as enthusiast followers at the same time their cheeks rose with excitement.

Asmodeus: “Surrendering so easily? How boring.”

The Demon King Asmodeus was sticking to the vitality of the surface to stave off boredom for the time being. Holy cow, what a crisis of chastity on earth!

Mammon: “Here I a~m, I’ve come to deliver the medicine as you ordered~.”

Appearing with exquisite timing, there was the Demon King Mammon, with a clear head and a voluptuous body that didn’t lose to Lady Asmodeus’.

Asmodeus: “Medicine? I wonder, did I order such a thing?”

Mammon: “Earlier, didn’t you say you wanted something with which to thoroughly enjoy the summer, when it’s hot, humid and boring?”

Asmodeus: “Really? Did I say such a thing?”

Mammon: “With this, I think you’ll enjoy to your heart’s content.”

There were rumors about the elixirs with Mammon’s mark, their reputation was that they had weird effects.

When Lady Amadeus took the small vial Lady Mammon offered her, she called a passing youth, to try this liquid first…

Mammon: “Non, non, the usage is different. This medicine is for exclusive use of a Demon King.”

Asmodeus: “Is that so…? How unpleasant. Somehow, it’s too suspicious, it’s throbbing…”

As she said something of the sort, Lady Asmodeus drank up the medicine in a gulp without any hesitation. She understood that it’d have weird effects, but rather than just go along with the flow, she was quite anticipating those weird effects!

It was then that…!

Asmodeus: “Eh? What’s wrong? What does this mean? Everything around me has suddenly grown…”

Lady Asmodeus, you got it backwards! It’s you who has shrunk.

Mammon: “It was a success. How about it? If you become so small, won’t the usually boring daily life scenery look totally different?”

She was now around 17 cm tall. She looked like she’d go flying if someone blew on her, the tiny Demon King.

While she felt hotter gazes than usual on her whole body, something naughty occurred to Lady Asmodeus, called the clerk at once, and ordered a sweet, cold strawberry parfait.

Lady Asmodeus lightly blew a kiss to those around her watching the course of events excitedly, and laid her beautiful body on top of the vanilla ice cream.

Asmodeus: “It’s co~ld. But this coldness, feels so nice…”

Far from minding the people’s stares, Lady Asmodeus was teasing them with such and such poses, and was already doing just whatever she wanted.

Sloppily relaxing her mouth, making a wet effect on her eyes as if she was tempting people even more indulgently than usual, her “impact” was increased several times further. Who wouldn’t be fascinated with this?!

Asmodeus: “Geez… the ice melted, how sticky… I wonder if I should take off all my clothes?”

Asmodeus: “Suckle, suckle… drool… cozy, cozy… giggle, if you stare at me so much, I’ll get embarrassed. Hn, do you want a bite…?”

This person, to say such a thing so matter-of-factly!

I might as well get a bite of you! I want to taste you at any price!

With such flirting by the Demon King, the body temperature of us people around is going to rise without stopping…!

Asmodeus: “Giggle. Everybody has melted away…” 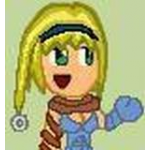