Maria Totsuka is one of the main characters of the anime. Prior to her enslavement at the hands of Lucifer, Maria devoted herself towards her friends and her religion. Divine blood from the former angel was secretly transplanted into Maria's body in the stopover of her fall from Heaven. Since then, she has served the turned-Demon Lord of Pride, who claimed Maria's heart.

Maria has medium black hair styled into rough bob-cut and light blue/grey eyes. She wears her church uniform, that is coupled with a black belt, mini skirt, black elegant tights and white sleeves. She is fair-skinned and wears brown buckled boots, finished with a silver crucifix-like cross on the neck of her outfit. Lastly, her physique is fairly average for an older teenage lady, with a moderately sized bust and waistline.

Maria is a submissive young lady who highly disapproves of dodgy acts and hates being mistreated, whether the actions are abusive or lewd in nature. She acknowledges Leviathan's hatred towards her that stems from Lucifer's preference not sitting with the minor demon lord of Envy; even so, Maria feels sorry for her.

When it comes to the other demon lords, Maria serves as the perfect bait. Her gentle and understanding nature is used to delve deeper into a person's motives, and thus Lucifer abuses this trait in order to lower the guard of her enemies.

With her body infused with Lucifer's divine blood before the latter's fall continued into Hell, Maria gained the ability to sense the location of the other demon lords. Oddly enough, this ability seems to only activate when Lucifer becomes intimate with her.

Maria also has a strong will that is more than enough to defy the power of the demon lords. For example, she was able to resist Asmodeus's perverted temptations, as well as snap out of Mammon's hallucinations brought on by her breast milk.

Maria in her first appearance.

Maria meeting the now ex-archangel Lucifer for the first time. 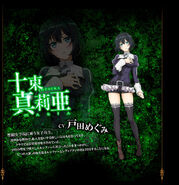 Maria's Anime Character Page
Add a photo to this gallery
Retrieved from "https://7-sins.fandom.com/wiki/Maria_Totsuka?oldid=5616"
Community content is available under CC-BY-SA unless otherwise noted.