"Very well. It's war between you and this guardian hag."

Satan is the Demon Lord of Wrath, known for terrible anger.

Satan has waist-length crimson hair and two long horns on the sides of her head curling toward the center and then pointing straight upwards. She wears a long red flowing cape, a red bra, a red G-string, ornate red gauntlets, black gloves, ornate black thigh-high high-heeled boots covered by red pieces of armor with black and red metal ankle-wings on the sides of her boots. Her weapon is a huge red spear-axe hybrid that is even taller than her.

Lady Satan is always engaged in an eternal battle against the angel legions, and likes war more than her three meals.

With a personality that gets anxious over the little details, she’s dangerous because she’s always irritated. However, it might be wise not to be hard on her. She has a weakness for cute animals, and is another one that doesn’t have a clear head.

Satan is known for her temperament, which can be attributed and seen in her fighting prowess. She commands an entire army, whom are followers of her sin. Satan's endurance is incredible, helping her survive blows that would usually kill anyone. 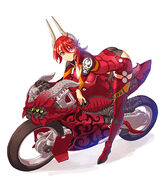 Satan being confronted by Lucifer and Leviathan.

Belial commanding Satan during their first battle with Lucifer.
Español
Community content is available under CC-BY-SA unless otherwise noted.
Advertisement